Lucy Snell is known throughout the Southern Maryland and metro Washington, DC area as a dynamic flutist and flute teacher.

In demand as a flutist, Lucy Snell’s credits include thirty years of performing in The United States Air Force Band where she played flute, alto flute, bass flute and piccolo in the Concert Band, Symphony Orchestra and Chamber Trio.  She has also won positions in the Professional Flute Choir of the National Flute Association for seven years, and performed with the Virginia Symphony, Albuquerque Symphony and Colorado Philharmonic Orchestras.  She now appears as recitalist and clinician throughout the DC area, and in the Virginia Grand Military Band. Ms. Snell and several of her students are following the  Royal Conservatory of Music Development Program. Lucy has completed Level 10. She earned the Gold Medal (highest score in the nation) for 2016 Level 8 Flute.

Ms. Snell holds a Masters Degree in Music Education from Indiana University, Bloomington, IN, and a Bachelor’s Degree in Music Education from the University of New Mexico.  She has studied flute with Frank Bowen, Kenton Terry and Laurie Sokoloff.   She is a regular performer in the master classes of Goran Marcusson at  Wildacres Flute Retreat. She holds Permanent Certification in Flute through the  Music Teachers National Association and is treasurer of the local organization, Music Teachers Association of Charles County.  Lucy also practices aerial yoga at the Live Out Loud Yoga studio in La Plata, MD, and is a slalom water skier. 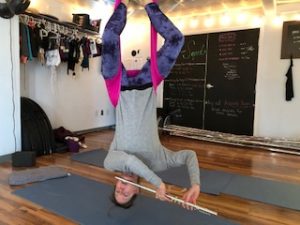